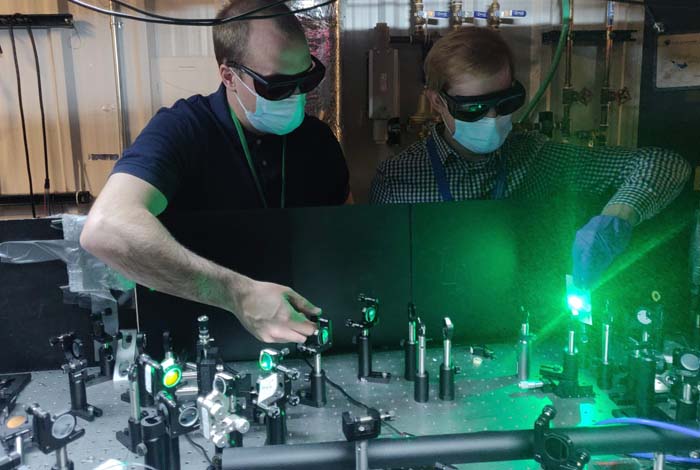 A new, highly versatile class of quantum dots excel as single-photon emitters, with applications in biomedical imaging, quantum communication, cybersecurity, and many other fields. Zachary (Zack) Robinson (left) and Vladimir Sayevich (right) are part of the team that has developed these infrared-emitting quantum dots.

“The demonstration of high single-photon purity in the infrared has immediate utility in areas such as quantum key distribution for secure communication,” said Victor Klimov, lead author of a paper published today in Nature Nanotechnology by Los Alamos National Laboratory scientists.

The Los Alamos team has developed an elegant approach to synthesizing the colloidal-nanoparticle structures derived from their prior work on visible light emitters based on a core of cadmium selenide encased in a cadmium sulfide shell. By inserting a mercury sulfide interlayer at the core/shell interface, the team turned the quantum dots into highly efficient emitters of infrared light that can be tuned to a specific wavelength.

“This new synthesis allows for highly accurate, atomic-level control of the thickness of the emitting mercury sulfide interlayer. By changing it in increments of a single atomic layer, we can tune the wavelength of the emitted light in discrete quantized jumps, and further adjust it in a more continuous fashion by tuning the cadmium selenide core size,” said Vladimir Sayevich, the lead chemist on this project.

Single photons can be used as qubits in quantum computing. In a cybersecurity application, single photons can protect a computer network through quantum key distribution, which provides ultimate security through “unbreakable” quantum protocols.

Bio-imaging is another important application. The emission wavelength of the newly developed quantum dots is within the near-infrared bio-transparency window, which makes them well suited for deep tissue imaging.

People can’t see infrared light, but many modern technologies rely on it, from night-vision devices and remote sensing to telecommunications and biomedical imaging. Infrared light is also a big player in emerging quantum technologies that rely on the duality of light particles, or photons, which can also behave as waves. Exploiting this quantum property requires sources of “quantum light” that emit light in the form of individual quanta, or photons.

“There is also a cool chemical element in achieving single-atomic layer accuracy in making these dots,” said Zack Robinson, the project member focusing on quantum dot spectroscopy. “The thickness of the emitting mercury sulfide interlayer is identical across all dots in the samples. That’s very unique, especially for a material made chemically in a beaker.”

Klimov added, “However, this is just the first step. In order to take full advantage of ‘quantum light’ one needs to achieve photon indistinguishability, that is, to make sure that all emitted photons are quantum-mechanically identical. This is an extremely difficult task, which we will tackle next in our project.”

The funding: The synthetic and device part of this work were funded by the Los Alamos Laboratory Directed Research (LDRD) project “Quantum photonics with semiconductor nanocrystals.” Ultrafast spectroscopic studies were funded by the U.S. Department of Energy–Office of Basic Energy Sciences project “Photoinduced dynamics at chemically assembled quantum interfaces” within the Solar Photochemistry Program.