New study shows scientists the ‘snowflake in a rainstorm’ 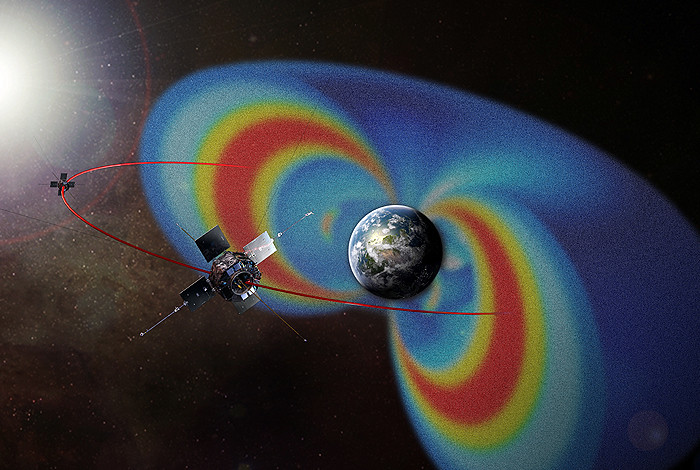 LOS ALAMOS, N.M., March 20, 2017—The inner Van Allen belt has less radiation than previously believed, according to a recent study in the Journal of Geophysical Research. Observations from NASA’s Van Allen probes show the fastest, most energetic electrons in the inner radiation belt are actually much rarer and harder to find than scientists expected. This is good news for spacecraft that are orbiting in the region and can be damaged by high levels of radiation. The results will also help scientists better understand—and detect—effects from high-altitude nuclear explosions.

“Basically what we’re doing is detecting very small signals against very large backgrounds,” said Geoff Reeves, a space physicist at Los Alamos National Laboratory and co-author of the study. “Let’s say you have a few snowflakes in a rainstorm—but you’ve never seen snowflakes before. How do you ignore the rain so you can just see the snowflakes? That’s what we’ve done here: we ignored a whole lot of protons so we could see the electrons—and it turns out there aren’t as many as we thought.”

The Van Allen belts are two doughnut-shaped regions of charged particles encircling Earth (video). Past space missions have not been able to distinguish electrons from high-energy protons in the inner radiation belt. But by using a special instrument, the Magnetic Electron and Ion Spectrometer (MagEIS), on the Van Allen Probes, scientists could look at the particles separately for the first time. What they found was surprising: almost none of these super-fast electrons, known as relativistic electrons, are present in the inner belt.

Los Alamos National Laboratory has interest in the applications for space weather forecasting to protect satellites and also for monitoring the Nuclear Test Ban Treaty, which prohibits nuclear explosions in space. “A high-altitude nuclear explosion results in the creation of an artificial radiation belt,” said Reeves. “We can learn about the physics of an explosion by looking at these hard-to-detect relativistic electrons. If an artificial radiation belt were ever detected, these new observations would help us understand it better.”

Of the two radiation belts, scientists have long understood the outer belt to be the more active one. During intense geomagnetic storms, when charged particles from the sun hurtle across the solar system, the outer radiation belt pulsates dramatically, growing and shrinking in response to the pressure of the solar particles and magnetic field. Scientists thought that the inner belt maintains a steady position above Earth’s surface. The new results, however, show that’s not always true. For example, during a very strong geomagnetic storm in June 2015, relativistic electrons were pushed deep into the inner belt.

“When we carefully process the data and remove the contamination, we can see things that we’ve never been able to see before,” said Seth Claudepierre, lead author and Van Allen Probes scientist at the Aerospace Corporation in El Segundo, Calif. “These results are totally changing the way we think about the radiation belt at these energies.”

Given the rarity of the storms that can inject relativistic electrons into the inner belts, the scientists now understand that lower levels of radiation are typical there, a result that has implications for spacecraft flying in the region. Knowing exactly how much and what type of radiation is present in any given region of space may enable scientists and engineers to design lighter and cheaper satellites tailored to withstand the specific radiation levels they’ll encounter.

In addition to providing a new outlook on spacecraft design, the findings open a new realm for scientists to study next.

“This opens up the possibility of doing science that previously was not possible,” said Shri Kanekal, Van Allen Probes deputy mission scientist at NASA’s Goddard Space Flight Center in Greenbelt, Md., and not involved with the study. “For example, we can now investigate under what circumstances these electrons penetrate the inner region and see if more intense geomagnetic storms give electrons that are more intense or more energetic.”

The Van Allen Probes is the second mission in NASA’s Living with a Star Program and one of many NASA heliophysics missions studying our near-Earth environment. The spacecraft plunge through the radiation belts five to six times a day on a highly elliptical orbit to understand the physical processes that add and remove electrons from the region. The Johns Hopkins Applied Physics Laboratory in Laurel, Md., built and operates the Van Allen Probes for NASA’s Science Mission Directorate.

About the Van Allen Probes

The Van Allen Probes is a NASA mission that studies two extreme and dynamic regions of space known as the Van Allen Radiation Belts that surround Earth. Named for their discoverer, James Van Allen, these two concentric, donut-shaped rings are filled with high-energy particles that gyrate, bounce, and drift through the region, sometimes shooting down to Earth’s atmosphere, sometimes escaping out into space. The radiation belts swell and shrink over time as part of a much larger space weather system driven by energy and material that erupt off the sun’s surface and fill the entire solar system.

Launched on August 30, 2012, the two Van Allen Probes spacecraft operate in the harsh conditions they are studying. While other satellites have the luxury of turning off or protecting themselves in the middle of intense space weather, the Van Allen Probes must continue to collect data and, therefore, have been built to withstand the constant bombardment of particles and radiation they will experience in this intense area of space.