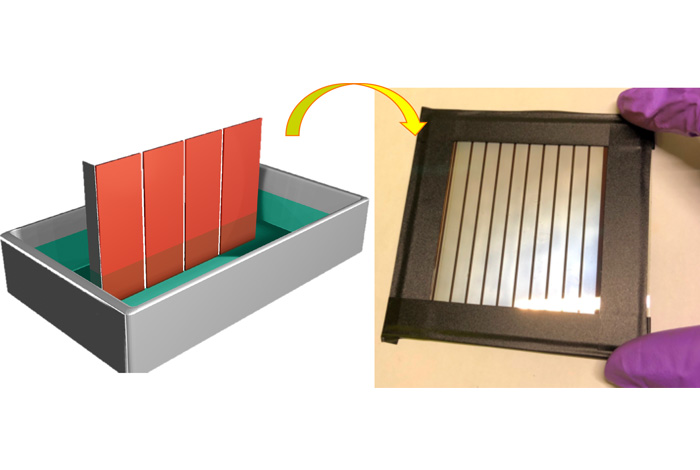 A new dipping process using a sulfolane additive creates high-performing perovskite solar cells. The method is inexpensive and well-suited for scaling up to commercial production.

LOS ALAMOS, N.M., March 18, 2021—A new, simpler solution for fabricating stable perovskite solar cells overcomes the key bottleneck to large-scale production and commercialization of this promising renewable-energy technology, which has remained tantalizingly out of reach for more than a decade.

“Our work paves the way for low-cost, high-throughput commercial-scale production of large-scale solar modules in the near future,” said Wanyi Nie, a research scientist fellow in the Center of Integrated Nanotechnologies. Nie is the corresponding author of the paper, which was published today in the journal Joule. “We were able to demonstrate the approach through two mini-modules that reached champion levels of converting sunlight to power with greatly extended operational lifetimes. Since this process is facile and low cost, we believe it can be easily adapted to scalable fabrication in industrial settings.”

Perovskite photovoltaics, seen as a viable competitor to the familiar silicon-based photovoltaics on the market for decades, have been a highly anticipated emerging technology over the last decade. Commercialization has been stymied by the lack of a solution to the field’s grand challenge: scaling up production of high-efficiency perovskite solar cell modules from the bench-top to the factory floor.

The team, in collaboration with researchers from National Taiwan University (NTU), invented a one-step spin coating method by introducing sulfolane as an additive in the perovskite precursor, or the liquid material that creates the perovskite crystal through a chemical reaction. As in other fabrication methods, that crystal is then deposited on a substrate.

The new process allowed the team to produce high-yield, large-area photovoltaic devices that are highly efficient in creating power from sunlight. These perovskite solar cells also have a long operational lifetime.

Through a simple dipping method, the team was able to deposit a uniform, high-quality perovskite crystalline thin film covering a large active area in two mini-modules, one of about 16 square centimeters and the other nearly 37 square centimeters. Fabricating uniform thin film across the entire photovoltaic module’s area is essential to device performance.

For other perovskite fabrication methods, one of the major roadblocks to industrial-scale fabrication is their narrow processing window, the time during which the film can be laid down on the substrate. To get a uniform crystalline film that’s well bonded to the layer below it, the deposition process has to be strictly controlled within a matter of seconds.

Using sulfolane in the perovskite precursor extends the processing window from 9 seconds to 90 seconds, forming highly crystalline, compact layers over a large area while being less dependent on the processing conditions.

The sulfolane method can be easily adapted to existing industrial fabrication techniques, which helps to pave the path toward commercialization.

A perovskite is any material with a particular crystal structure similar to the mineral perovskite. Perovskites can be engineered and fabricated in extremely thin films, which makes them useful for solar photovoltaic cells.

The funding: This work was performed, in part, at the Center for Integrated Nanotechnologies, an Office of Science User Facility operated for the U.S. Department of Energy (DOE) Office of Science by Los Alamos National Laboratory (LANL) (Contract 89233218CNA000001). Work performed by Shreetu Shrestha and Wanyi Nie was supported by the LANL-LDRD program. Hsinhan Tsai acknowledges the financial support from J. Robert Oppenheimer (JRO) Distinguished Postdoc Fellowship at LANL.