Arrays of nanomagnets known as Artificial Spin Ice can host high densities of mobile “magnetic charges” at room temperature, opening the door to new studies of these monopole-like quasiparticles in synthetic matter 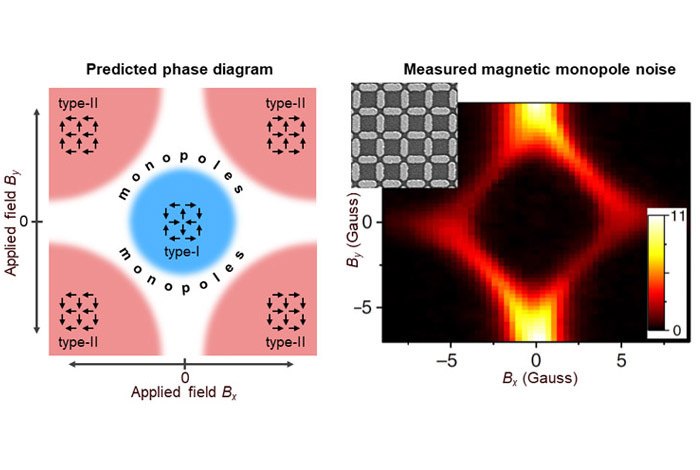 Arrays of interacting nano-magnets can host regimes containing a high density of mobile excitations that behave as magnetic monopoles, which can be revealed by carefully ‘listening’ to the magnetization noise that they spontaneously generate.

Magnetic monopoles are notional particles that possess a magnetic “charge,” in direct analogy to the electric charge carried by electrons. Their existence was postulated in the late 19th century by Pierre Curie (husband of Marie Curie), and a quantum theory of monopoles was established by Paul Dirac nearly 40 years later. While the existence of elementary magnetic monopoles remains hypothetical, certain “spin ice” materials (such as crystals of Dy2Ti2O7 at very low temperature) can host magnetic excitations that can be described very well as monopole-like quasiparticles. These effective magnetic charges can move through the crystal lattice in response to applied magnetic fields, leading to a new area of study known as “magnetricity,” in analogy to electricity.

Monopole-like excitations can also occur in engineered arrays of nanomagnets known as Artificial Spin Ices (ASIs). Initially conceived as 2D analogs of natural spin ice crystals, ASIs provide tremendous flexibility to design new types of magnetic interactions, including exotic configurations not found in nature. The most common arrangement - with which ASI were first demonstrated in 2006 - is the simple square lattice shown in the figure. In this work, we demonstrate that the archetypal square ASI lattice can host, at certain magnetic fields, regimes containing a very high density of mobile magnetic monopoles, even at room temperature.

Each individual rectangular nanoisland in an ASI acts like a little bar magnet, with North and South magnetic poles at opposite ends of its long axis. Although the islands cannot rotate, the direction of their magnetization (ie, their North and South poles) can switch – in fact, the nanoislands used in this work were intentionally designed so that their magnetic direction can be easily switched at room temperature.

When assembled into a square lattice, these little magnets interact with each other and try to align their magnetization directions accordingly. Because the interactions are strongest between adjacent horizontal and vertical islands, it is well known that square ASI settles into a particular ordered state in the absence of any external magnetic field: each vertex has two opposing North and two opposing South poles, as shown, giving a balanced magnetic charge of zero. This particular vertex arrangement is known as a “type-I”. Similarly, in a sufficiently large magnetic field applied along a diagonal, all the islands will try to align with the field, and in this case each vertex still has two North and two South poles, but in a different arrangement (“type-II”).

The key point is that to change between type-I and type-II tiling in square ASI – which happens at some special crossover magnetic field Bc - some of the islands have to flip their magnetic direction. As shown in the figure (or as easily verified by arranging kitchen matches on a table), flipping an island invariably creates a pair of vertices with unbalanced magnetic charge: one vertex will have 3 North poles and 1 South pole, while the other has 1 North and 3 South poles. These vertices can be described as having an unbalanced magnetic charge of +2 or -2, and therefore as “monopole-like excitations.”

Additional flips of other islands can create additional monopole pairs, annihilate adjacent monopole pairs, or cause an existing monopole to effectively *move* through the lattice. All of these processes involve flipping of individual islands, which cause the total magnetization to fluctuate in time. To put it differently, magnetic fluctuations in square ASI are inextricably linked to the creation, annihilation, and motion of these magnetic monopole-like particles in the lattice.

In close collaboration with the groups of Peter Schiffer at Yale and Chris Leighton at U. Minnesota, researchers at Los Alamos National Laboratory designed an experiment that uses light to passively ‘listen’ to these small intrinsic fluctuations in the archetypal square ASI lattice. By detecting this so-called “magnetization noise” at different applied magnetic fields, it was possible to map out regions where the number of monopoles increased dramatically and spontaneously – precisely along the boundary between type-I and type-II magnetic order, as anticipated. Moreover, the detailed frequency spectrum of the noise encoded many of the underlying kinetic properties of the monopoles; for example, the extent to which they diffused and interacted like ordinary particles in a gas or liquid.

It has long been appreciated that such monopole-like excitations (in both artificial and naturally-occurring spin ice materials) can be manipulated by applied magnetic fields, in a manner similar to the way ordinary electrons are manipulated by electric fields, thereby giving rise to the new concept of “magnetricity. These new results open the door to on-demand monopole regimes having tunable densities and dynamic properties, thereby providing a new paradigm for probing the physics of effective magnetic charges in synthetic matter.