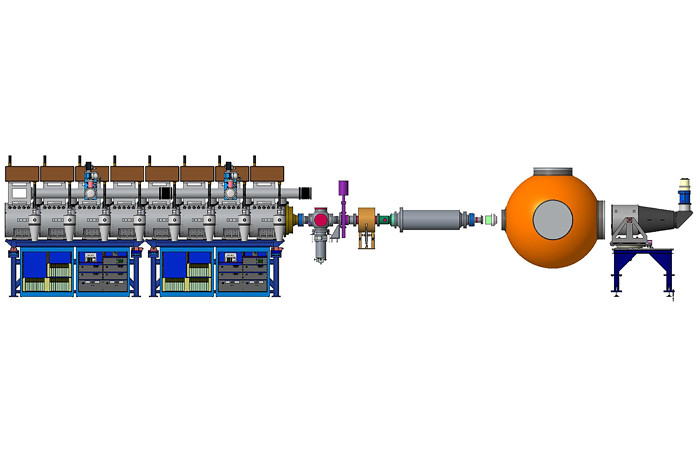 An abbreviated concept illustration shows a portion of the ASD accelerator and target vessel.

The first analysis of the Glen Torridon region in the Gale crater on Mars shows that bedrock in the area was changed by groundwater in the planet’s early history, which has important implications for understanding past habitability and the possibility of finding past life on Mars. The findings, published in a special issue of Journal of Geophysical Research Planets, describe some of the first results from the Glen Torridon region.

“The primary reason that the rover was sent to Mars was to investigate this region so we can understand the transition from an early, warm and wet Mars to a cold and dry one,” said Patrick Gasda, of the Space and Remote Sensing group (ISR-2) and lead author on the study. “This region probably represents the last stages of a wet Mars, and we want to understand the lake sediments in order to give us a baseline for what happened right before Mars’ climate changed. It turns out this was a very active time in Mars’ history.”

The NASA Curiosity rover explored the ancient lakebed rocks within the Glen Torridon region from January 2019 to January 2021. During that time, the rover observed signs that the bedrock was changed by groundwater, especially in the higher elevations along the rover’s path.

The rover also discovered a surprisingly high number of nodules, veins and other features related to water alteration of the bedrock.

The research team used data from the rover’s ChemCam instrument, which was developed at Los Alamos and CNES (the French space agency), to record chemistry and images from the four cameras on the rover in order to look for physical and chemical changes to the rocks.

“First we saw a large number of dark-toned, rounded ‘nodules’ throughout the rock, and these features usually form in the soft sediments that are found in active lakes on Earth, so that’s likely how they formed on Mars,” Gasda said.

Then the rover observed large dark and white veins with strange chemistry, including high iron and manganese dark veins, and fluorine-rich lighter veins.

“These veins are very perplexing. We think, in the early stages of the crater, when the initial impact heated the rocks surrounding the crater, groundwater flowed through those rocks. We think this hot water likely extracted elements such as fluorine from these rocks,” Gasda said. “High concentrations of fluorine are usually only found in hydrothermal systems on Earth. We did not expect to find veins with chemistry like this in Glen Torridon.”

“If hydrothermal systems like these were active during the time of the lake, as we hypothesized in the paper, it would be very exciting,” Gasda said.

These systems would bring redox elements (including iron, nickel, sulfur and manganese) to the surface of Mars, and microbes use these elements to derive energy. On Earth, deep sea hydrothermal vents can produce hydrogen and methane gas, and some more complicated organic molecules; these are places that could have synthesized the basic building blocks of life on ancient Earth.

“The possibility of this existing on Mars is very cool,” Gasda said.

These veins may be connected to other veins and nodules with enigmatic chemistry that have been found throughout the crater earlier in the mission. It could be that the crater was altered on a larger scale with groundwater that was related to the initial impact of the crater.

The rock beneath the crater likely remained warmer for longer than researchers initially thought, which would account for the higher concentration of elements such as fluorine in the groundwater. This groundwater could have circulated widely in the crater, forming other veins of varying chemistry for a long time after the crater initially formed.

The Paper: Overview of the Morphology and Chemistry of Diagenetic Features in the Clay-Rich Glen Torridon Unit of Gale Crater, Mars. Published in the Journal of Geophysical Research Planets.