Xuite, in the garnet group, is named for Hongwu and Huifang Xu 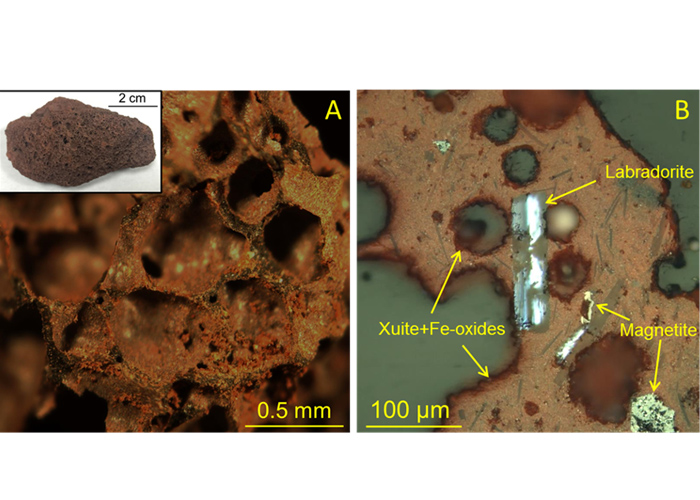 The newly named mineral, xuite, is shown here magnified in images A and B. The reddish area contains the xuite, hematite, and silica-rich glass.

LOS ALAMOS, N.M., Jan. 25, 2021—A vanishingly tiny mineral is being named for two scientists who have revolutionized the analysis of mineral samples. Xuite (pronounced “zoo-ite”), the newest member of the nano-mineral pantheon, is named in honor of Los Alamos National Laboratory mineralogist Hongwu Xu and the University of Wisconsin’s Huifang Xu.

“It is a wonderful honor to see a new mineral named for Hongwu Xu and his colleague Huifang Xu. The rare mineral, which typically forms in cooling lavas and scorias, is a member of the garnet group of minerals,” said Terry Wallace, former director of Los Alamos National Laboratory, who is also a noted geologist and the only other Los Alamos scientist for whom a mineral, terrywallaceite, is named.  “The honor of the naming is in recognition of Hongwu’s outstanding contributions to mineralogy and the science of an evolving planet Earth.”

“Nano-mineralogy is at the forefront of mineralogical research, and with the increasing applications of unprecedented characterization techniques, more nano-minerals are expected to be found in nature,” Hongwu Xu said.

“Huifang and I (no relation) have extensively utilized such techniques as X-ray scattering, neutron diffraction, electron microscopy and calorimetry in our studies of various materials including nano-minerals,” Xu said. “In particular, the combination of high-resolution synchrotron X-ray diffraction with high-resolution transmission electron microscopy was the key in our own discovery of two new nano-minerals, Luogufengite and valleyite, due to their nano-crystalline nature.”

In the case of xuite, the dark brown and reddish mineral has been found at two locations: the late Pleistocene basaltic scoria from Menan Volcanic Complex in Idaho and in paralava (naturally combusted coal beds) from Gillette, Wyoming.

The discovery of xuite, a nano-mineral like the ones previously discovered by Xu and Xu and their collaborators, was another example of successful application of this combined instrumental approach. These nano-minerals may provide important insight into the formation of their hosted rock — basaltic scoria or paralava — and associated paleomagnetism.

The International Mineralogical Association approved the honored naming, which had been proposed by Seungyeol Lee of NASA Johnson Space Center and USRA Lunar and Planetary Institute, and by Xiofeng Guo of Washington State University. Three specimens will be stored permanently in the Geology Museum of the Department of Geoscience, the University of Wisconsin-Madison. Other specimens will be donated to national museums including the National Museum of Natural History and American Museum of Natural History.