Widespread fracturing during lake drainage dominant cause of 'moulin' formation 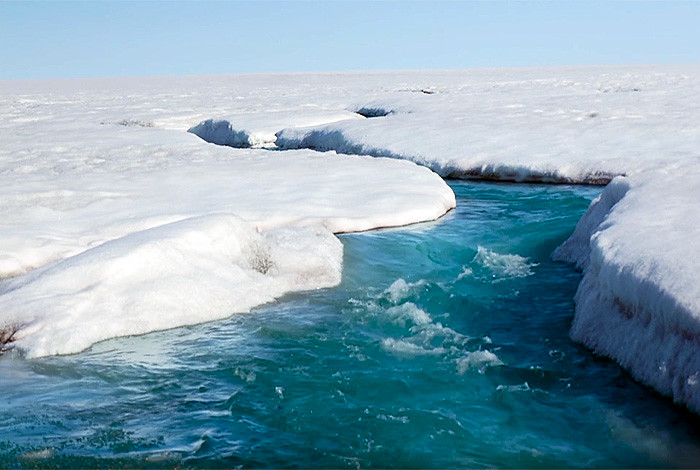 Scientists at Los Alamos are uncovering the mystery of how, where and when important glacial features called “moulins” form on the Greenland Ice Sheet.

Scientists at Los Alamos are uncovering the mystery of how, where and when important glacial features called “moulins” form on the Greenland Ice Sheet. Moulins, vertical conduits that penetrate through the half-mile-deep ice, efficiently funnel the majority of summer meltwater from the ice surface to the base of the ice sheet. The lubricating effects of the draining water can lead to faster sliding of the ice sheet.

“Forming a moulin in Greenland requires a crack on the ice surface, which becomes filled with water that eventually drives the crack through the ice. But there’s a mystery here: A large fraction of the moulins in Greenland form some distance away from the ice sheet’s existing crevasse fields,” said Matthew Hoffman, a Los Alamos glaciologist and computer scientist. Hoffman is corresponding author on a paper this week in Geophysical Research Letters, coauthored by Stephen Price, also of Los Alamos, and researchers from Sandia National Laboratories, NASA Goddard Space Flight Center, and the universities of Montana, Texas, and Zurich.

“To explore the moulin formation question, we compared satellite-image maps of moulins with computer simulations driven by hourly, on-site ice velocity measurements from GPS stations,” he said. “We determined that the key is in the meltwater lakes that form on the ice sheet surface and that can catastrophically drain through the ice in a matter of hours,” he said. “The massive ice flow speedup caused by all this water reaching the bed literally pulls the ice at the surface apart over a wide area, temporarily creating pervasive cracks, which seed new moulins where these cracks intersect meltwater flowing on the surface.”

Stephen Price, a Los Alamos co-author on the work, notes that “While these catastrophic lake drainages have been known about for a decade or so, their broader impacts on the ice sheet appeared restricted to a couple of days of localized, faster motion.”

“These new results indicate a potentially much broader importance for lake drainage events, since moulins control the locations where the majority of seasonal meltwater enters the ice sheet, accesses the bed, and accelerates the ice flow. These processes, which aren’t currently accounted for in computer simulations of ice sheet evolution and sea-level change, may need to be considered more carefully in future models,” Price said.

This project is the first effort to assimilate hourly scale resolution GPS observations into an inverse ice dynamical modeling framework. With hourly estimates of the basal conditions of the ice sheet and stresses within the ice, the research reveals important details of the impact of summer meltwater-induced speedup on ice sheet motion.

The lake drainage events themselves are actually relatively infrequent (at most once per year per lake), but the authors point out that the ability of moulins formed during lake drainage events to persist multiple years once formed gives each summer drainage event a long-lived legacy. Moulin density and its impact on where and how much water is delivered to the bed are a critical control on subglacial drainage efficiency, evolution and, in turn, the flow of the ice itself.

By triggering the formation of moulins, the authors note, “the impact of lake drainage on ice dynamics and Greenland’s summer speedup is likely to be more extensive than the direct and short-lived speedup following the drainage itself.”

And while one might think that moulins would form primarily near crevasse fields, where vulnerable cracks provide an easy path for moulin formation, this is not the whole story, Hoffman said. Lakes generally form in uncrevassed regions, and a catastrophic lake drainage event appears capable of  triggering new moulin formation — and in some cases additional lake drainages — up to many kilometers away in ice that is otherwise unyielding.

While previous studies identified a distinct possibility of a cascading effect from meltwater reaching the bed and modifying local stresses to cause nearby supraglacial lake drainage, “our results provide direct evidence that this effect is more widespread and can act over distances of many kilometers,” Hoffman said.  This long-distance triggering mechanism could make new regions of the ice sheet vulnerable to meltwater-induced speedup, including at higher elevations.

Funding: The Los Alamos component of the project was supported by Laboratory Directed Research and Development funds and the US Department of Energy Office of Science.